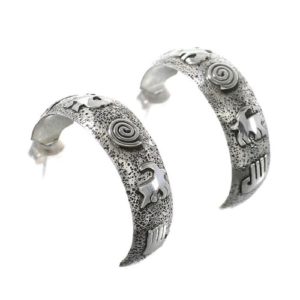 Overlay is one of the most impressive-looking techniques in modern silverwork. Most prominently used by the Hopi, this technique is comprised of soldering two or more sheets of silver and tracing the image of a symbol, pattern, or figure onto one of the sheets, so it appears etched into the finished product. The result is something truly stunning and can’t be matched. The technique can also employ the use of colored enamels in the firing process to produce a variety of coloration within the silver itself. Many believe that this style of silverwork creates the crispest image possible when tracing figures.

Starting in Germany in the mid-18th century, the style was quickly adapted all over the world and eventually brought to the Native Americans through Spanish silversmiths who traded their techniques for various goods.

Since this time, the Native Americans used their own methods, skills, and traditions to make a style all their own and remain one of the world’s leading experts in the old craft as well. Typically, the Hopi are heralded as the most talented in this craft and incorporate their beliefs and history into each piece.

Some items that people will often see in Native American overlay earrings are symbols like the water wave. The water wave is used to symbolize the cyclical nature of life and renewal.

Another common symbol that might be seen is the snake, turtle, and bear paw. All have their own unique meanings and origin stories according to the tribes that made the piece. The most common colors are usually silver and black, but with enamels, other common colors are gold and darker shades of gray.

This technique is a highly treasured skill among many tribes and continues to evolve as Native American artisan break from traditional styles into more contemporary designs.

When looking into Native American overlay earrings, you should look for imagery, coloration, and the quality of silver.